The Association of Caribbean Historians (ACH) is pleased to announce the winner of the 2020 Andrés Ramos Mattei-Neville Hall Article Prize in recognition of excellence in the field of Caribbean history. The prize committee awarded this year’s prize to Marvin Chochotte (Dartmouth College) for “The Twilight of Popular Revolutions: The Suppression of Peasant Armed Struggles and Freedom in Rural Haiti during the US Occupation, 1915-1934,” which was published in The Journal of African American History 103, no. 3 (2018): 277-308. The prize will be awarded at the 52nd Conference of the ACH in Le Gosier, Guadeloupe, June 6-11, 2021. 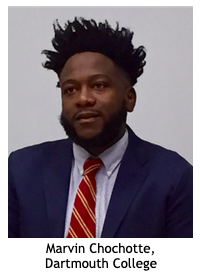 The prize committee would also like to make honorable mention of Tyesha Maddox (Fordham University) for “More than Auxiliary: Caribbean Women and Social Organization in the Interwar Period” Caribbean Review of Gender Studies, 12 (2018): 67-94 and Stefanie Hunt-Kennedy (University of New Brunswick) for “‘Had his nose cropt for being formerly runaway’: Disability and the Bodies of Fugitive Slaves in the British Caribbean” Slavery and Abolition, 41, no. 2 (2019): 212-233. Maddox’s piece examined more than fifty mutual aid and benevolent societies, drawing attention to the crucial but neglected role women have played in building Caribbean migration networks and grassroots political organizing in the Diaspora in New York City. The article highlights women’s role in creating deep and meaningful engagement with the black Diaspora the interwar period. Hunt-Kennedy makes novel use of runaway slave ads by analyzing them through the lens of disability studies, a promising new avenue for work in the field. She argues that through runaway advertisements and the law, slavery produced a peculiar kind of disability that was spatially, temporally, and conceptually bound. She reveals that disability, like gender and race, is socially constructed.

The Andrés Ramos Mattei-Neville Hall prize was launched in 1996 and is a biennial award for the best article in the field of Caribbean History. The award is named jointly for late ACH members Puerto Rican historian Andres Antonio “Tony” Ramos Mattei (1941-1988) and Jamaican historian Neville Hall (1936-1986).

For more information on the winning publication please visit: https://www.journals.uchicago.edu/doi/full/10.1086/698523.

If you would like more information on the award, please contact the ACH Secretary-Treasurer at achsecretary@gmail.com. The next award will be made at the 53rd Annual Conference in 2022. The call for submissions will be issued after the 52nd Annual Conference in 2021 and will cover publications in 2020 and 2021.This press release will be updated on the ACH website with translations in late July 2020.

The Elsa Goveia Book Prize is awarded every two years and will invite nominations for the 2021 Book Prize after the 2020 Conference. For more information about Eligibility Requirements and Submission Guidelines please contact the Secretary-Treasurer at achsecretary@gmail.com.